“France is crying, and the whole world, too.”– Ruairi Casey

September 11, 2001.  Do you remember where you were?  What you were doing? How you felt as you watched the towers fall? …April 19, 1995, 9:02 A.M.  How about that one?  Does that bring back sharp memories? Do you remember the agony of knowing your fellow Americans lie trapped beneath the rubble?  Think back further…Remember the day the Challenger exploded, the day the Berlin wall came down, the day the Gulf War started? How about the day they finally got Osama Bin Laden? I remember the headlines–that day felt pretty victorious in America, almost like a party.

This past week was to be the week that we as Oklahomans gathered together to remember those lost on April 19, 1995. Each year our collective memories gear up for the anniversary of our loss as a state.  Each year, I try to teach my kids the importance of learning about history from those who can remember it personally, not just by learning it from a history book.  I remind them that as their generation takes its place in history, they will someday have their own events burned on their collective conscience.  History that they will pass on to their own kids as a memory instead of from a history book. History is alive in the hearts and minds of those who’ve lived it–it’s personal.  While I can relate to them what it felt like to sit in school and learn about the Challenger exploding, they can go to their grandparents to hear firsthand stories of when Armstrong walked on the moon, or when Kennedy was shot.  It’s way more interesting to hear about it firsthand than to listen to your history teacher lecture about it while you try to stay awake in class.

So, this past week started with generations worth of historical memories already lying on the back burner of everyone’s mind.  It’s usually good for at least one Evening News recap–April is rife with historical events.  The sinking of the Titanic, Lincoln’s assassination, Boston Marathon Bombings, Oklahoma City bombing, Columbine shootings …Tax Day….the list is long and tedious.

And then I walked into a patient’s room this week and watched in horror as another historical event played out on the TV screen in front of me.  I was discharging a patient when I actually realized what was happening–I literally stopped talking mid-sentence, my mouth agape.  Tears sprang to my eyes as I watched in disbelief.  I could hardly stand to watch as I saw the flames and smoke of Notre Dame shoot higher than the great cathedral ever dreamed of reaching. Friends started texting me-“Did you see the news??”  Coworkers passed the word through the halls while the news spread like wildfire on social media. And as we watched her burn, we began sharing stories.  Reminiscing who had seen her when, and what was our favourite memory of her.   I had witnessed Notre Dame’s great beauty myself less than two years ago.  I was awestruck by her magnificence and had every intention of returning sooner rather than later to see her again.  Now I watched from almost 5,000 miles away as 850+years of history burned to the ground.  What mankind had managed to preserve for centuries was now gone in a matter of hours.

That evening I hugged my kids, and cried a few more tears for the majestic building that was now only a shell of its former self .  I related my memories of my time there, and we mourned her loss together. Then we talked.  “…Kids, remember when I’ve told you that your generation will have events that will go down in history, just like all the generations before? And that you will have your own ‘live’ version of that to pass on to your kids?  Here is one that will be in history books.  Remember what you were doing, where you were at, so that it is easier to bring it back to mind. Just as I can remember the day when Princess Diana died,  I want you to be able to remember the day Notre Dame burned.  Because you are a part of history yourself.  And how you relate to history and the world around you affects your life on a daily basis.”

I hope they can soak up my knowledge–what I’ve learned from my love for history, travel, and the world around me.    I hope what I’ve learned in my lifetime is not in vain, that they can retain it and use it for themselves.  So that they too have a love for life and respect for all mankind.  That they can pass it on and make the world a better place.  And I’m glad for my memories.  And my pictures of myself and that grand beauty.  For she was a building like no other.  I hope she is rebuilt, stronger and better than before.  That her purpose remains the same.  To point others to God as well as continue on as a historical legacy for generations to come.  To be an inspiration, a source of beauty, a place of worship, a safe haven.  She unites not only the people of France, but mankind as a whole.  I am so thankful to have been one of the millions to have passed through her doors and found peace within. 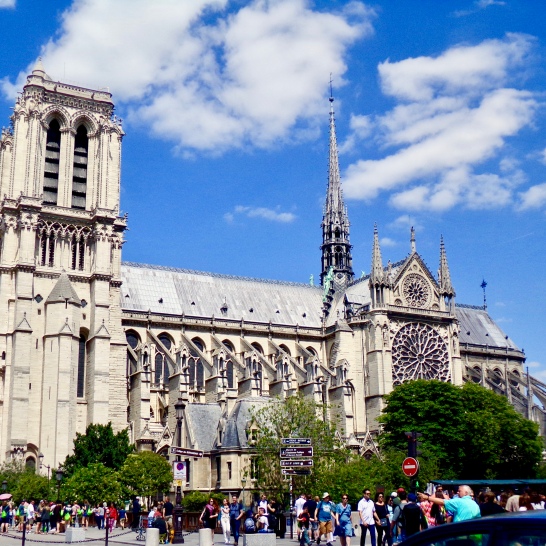 I'm a nurse, a mother, and a foster parent. I have so many hobbies that I can't afford to do them all. :) I LOVE travelling. I'm thankful for God, my hubby, family, and health. I am blessed. View all posts by nurseamesrn

Laughter is the Best Medicine

Patient quote of the day..

4-8-19 My 17-year-old Cadon’s quote on doing his laundry–“You know what I do with the mismatching socks? I throw them back in to the next load.  That way they are future Cadon’s problem!”